Posted on July 6, 2014 by Pierro Perspective

The 2014 NBA draft wrapped up a couple of weeks ago, and now that free agency is in full force it’s time to take a look the future of the Celtics and the NBA. Boston had two first round picks in the draft, #6 overall and #17 overall, with the 17th pick being acquired from Brooklyn in the Pierce/Garnett trade. They chose star point guard Marcus Smart from Oklahoma State with #6, and I was not a big fan of this pick. As a huge Rajon Rondo fan, this likely means that his days are numbered in Boston. The Celtics already have three players that can play the point, with Rondo, Bradley, and second year man Phil Pressey. I also dislike Smart due to his flopping reputation and immaturity at times. I would have liked to see them draft Julius Randle, who went to the Lakers with the very next pick, to give them some inside toughness and rebounding. On the other hand, I like the James Young selection at 17. The 6’6″ freshman shooting guard out of Kentucky provides a dynamic scoring option in the backcourt that I think would complement Rondo and Bradley very well. 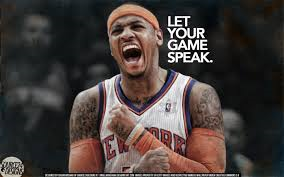 One of the two biggest free agents this summer is superstar forward Carmelo Anthony. The 2012-2013 NBA scoring champion spent the last few years on the New York Knicks before becoming a free agent on July 1. Potential destinations for Melo to land have been rumored to be back to New York, Los Angeles with the Lakers, Chicago to team up with Derrick Rose and the Bulls, Houston to pair with James Harden and Dwight Howard, and even a mega deal to go to Boston along with Kevin Love. At this current moment, it is being rumored that the Lakers are the Knicks’ top threat to land Carmelo Anthony. I am skeptical that this will happen. At this point in his career, Carmelo is looking to join a team that will contend for the next several years. The Lakers were awful last year, and even if Kobe Bryant comes back healthy, Kobe is nearing the last couple years of his career and there is no supporting cast in Los Angeles.

I definitely don’t think the Kevin Love/Carmelo Anthony deal to Boston will happen. It also wouldn’t make sense to go to Miami because he is too similar of a player to Lebron. Of the three options left, I think it makes the most sense for him to return to New York. The Knicks clichéd the #2 seed in the East just a year ago, and with Phil Jackson running the show now, Melo can be sure there will a valiant effort to put together a championship team. Houston would be my second choice for Carmelo. He would thrive in that high-powered offense and create a dynamic big 3 with James Harden and Dwight Howard, not to mention Houston is already a playoff contender. Third choice would be the Bulls. The health of Derrick Rose is a main reason why Chicago might not be able to pull this off, but if they could and Rose remains healthy, Chicago will instantly contend for the East.

The biggest decision in the NBA this summer will be the future of the Big 3 in Miami, who have opted out of their contracts to become free agents in order to give themselves more flexibility in the future. Rumors have swirled that Lebron might return to Cleveland to join his old franchise and pair up with young starts such as Kyrie Irving and Andrew Wiggins. One reason for not returning to Miami would be the health and consistency of Dwyane Wade, who carried the Big 3 in the early years but has been injured and inconsistent at times during the postseason. Despite this, the Heat were still a title contender until they got smashed by the Spurs in the Finals. Rumor had it that Lebron essentially forced the Heat to trade up in the draft to acquire point guard Shabazz Napier. Other rumors have it that the Heat are trying to acquire guards Kyle Lowry and Luol Deng. With Miami being one free agent away or so to being able to compete with the top teams in the Western Conference, I think Lebron will ultimately return to Miami with Wade and Bosh under significantly different contracts.